In 1994 I was working at Great Lakes, Illinois. I had no relatives in the area. There were lots of large families at church and in the general Waukegan-North Chicago community, but I often felt like the odd person out. I needed something to do.

For some reason I have always enjoyed school more as an adult than I ever did when I was school age. When Northern Illinois University offered graduate courses in Lake County I was thrilled to start work on another master’s degree, this time in adult continuing education.

Adults learn differently. I knew that from my own experience, but it was reiterated many times in my courses. One thing I was not prepared for when I entered the program was the inflated wordiness of many of the textbooks. Simple everyday words were given pre- and suffixes that made the words longer and gave them a scientific sound, but diminished clarity. As a career woman in her early fifties I had learned to be succinct. But succinct was not a part of my vocabulary until a professor so described me. I soon learned this was not intended as a compliment.

One book I especially remember was by a Mr. Pelkinghorne. The name of the book was Narrative Knowing.   I darted around in the book trying to get a feel for what the author was trying to tell me. Then I sat down to read more attentively. Still, the only message I got was a simple but to me a profound one. However, I could not see for the life of me what warranted a whole book. The message I got from reading this book was that everyone has, is, a story—a unique story. And to try to serve a person, as in one’s role as a physician, psychologist, social worker, or priest, without appreciating that one is dealing with a story is not only likely to prove ineffective, but is contemptible. Without an audience for our story, each of us is like a thread discarded from the fabric of humanity. 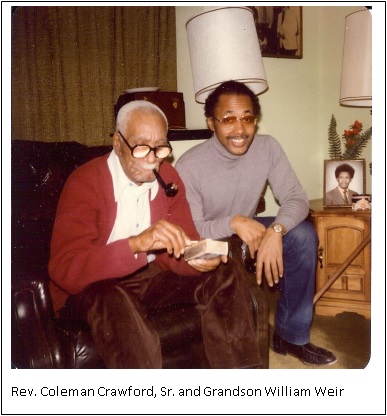 As a child in the rural South I was privileged to experience firsthand a rich oral tradition. When I read Alex Haley’s Roots in 1976, immediately I realized that in my childhood community my maternal grandfather had been in effect the African griot. In my earliest memories I can see people querying Grandpa about past dates and historical events. Over and over he was required to share the bounty of his memory, to tell stories everyone had heard many times before but wanted to hear again and again, to recall the good times and the bad, to bring to life persons long deceased, to recite family lineage and to quote biblical scripture. Grandpa, Rev. Coleman Crawford, Sr., was a Baptist minister.

Grandpa died in January of 1985, just four months before his hundredth birthday. Until his death his mind was very keen although his eyesight and hearing were considerably diminished. He had a great memory still, and an enduring gift for storytelling. He also had a forty-one-year-old granddaughter just as awed by his tales as when she was ten.

I don’t have the at-hand audience that Grandpa had. But as I write my life stories I laugh and often cry, knowing that I am speaking to my grandson, and to the generations after him. How are you telling your life stories?