Oh yes, it would be different. A female pastor would be assigned to our small African Methodist Episcopal Church for the first time. Not everyone was happy. Mr. Grady Mayberry confessed a couple of years after the appointment that it was he who begged Presiding Elder Vaughn, “Please don’t let the Bishop send no woman over here.” But now Mr. Mayberry was Rev. Ann McDonald’s strongest advocate and, as his health continued to decline, the greatest beneficiary of her pastoral care.

Before Rev. McDonald we had many pastors, great and not so great. The only thing they had in common was that they were male and commanded distance and deference above all else. They were products of and participants in what they perceived to be God’s patriarchy, steadfast and everlasting. For the most part they were men of good intentions, but they seldom departed from the script.

These men of the cloth knew the language of the Bible, but they didn’t know girl talk. For example, they had not the imagination to speculate on the reasoning of Job’s wife who suggested he curse God and die. They could be absolutely mystified that men would pass up Lot’s offer of his daughters, but they never gave any opinion as to what this may have meant to the daughters.

But then came Rev. Ann, as we began to call her. It was not to diminish her, but to show our love and high regard for her. We could touch her without straining to reach a high place. She could tell jokes. She was flesh and blood—human! She was married and had small children. And, she was a hopeless romantic. One thing she simply could not comprehend was how any woman could live and breathe without a man somewhere in her life. Her inability to understand this made her the perennial matchmaker.

Now my dear mother, a beautiful and determinedly independent lady, seemed to have determined twenty-six years before, when she snatched her last young’un on the train at Hays, Kansas, that she had had it with man, kind or otherwise. Since then any attempt at seriousness by any suitor had been for naught—so much so that in later years the would-be suitors seemed to sense the futility before the pursuit. But all that was before Rev. Ann McDonald. 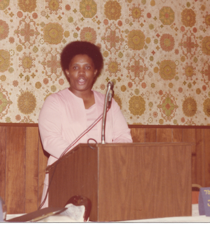 On Sunday, August 2, 1981, Rev. Ann hung around conspicuously as Mother, the church accountant, was getting the books and money together. Finally Rev. Ann revealed what was on her mind. She said, “Sister Weir, I know this very nice man who is looking for a wife like you. May I give him your number?”

Well, Mother was shocked but obviously a mite flattered. Then Mother asked what Rev. Ann meant by a wife “like you.” Rev. Ann explained that the gentleman was a recently retired and divorced Navy man who was looking for a woman with business sense. He was contemplating starting his own business. Another specification was that this woman be between forty and fifty years old. Mother was fifty-seven but Rev. Ann assured her there was no need to concern herself with such a minor detail. And anyway, you need tell a man only what you want him to know.

Rev. McDonald described this near perfect specimen of manhood as tall, modest, polite, good-looking, and serious. He was currently taking college business courses. After her intense spiel on his multiplicity of good points Rev finally admitted that she had noticed one definite flaw. When she met him he was wearing white socks. But she insisted that he had so many positive attributes that even white socks would be sufferable.

It was decided that Rev. Ann would invite this gentleman to church the next Sunday and make the introduction. My sister Carol was not at church while these plans were being formulated, so I called her during the week to prepare her for this historic event we were soon to witness. Sis was grateful.

Well, the day arrived. Cat and I were seated about two feet apart on one pew. Mother was facing us from the choir. Rev. Ann was in place in the pulpit. Leon Burns had just finished the Morning Prayer. Suspense was overbearing when the door creaked and the stranger entered. 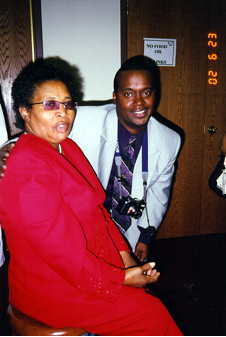 My head turned automatically, and without moving my lips I said to my sister, “Not bad Cat, it’s coming this way.” Naturally he sat between Carol and me on the pew immediately in front of us. We quietly inspected him from both sides and, smiling, nodded our approval. Well, that just about ended the worship service for all of us.

Rev. Ann was trying to remain stoic. Mother attempted to appear oblivious. Both of them were avoiding eye contact with Carol and me. Seeming to think she had achieved absolute self-control, Rev. Ann finally chanced a glance at Carol. Cat smiled and shook her head as if to say Naughty, naughty! Rev grabbed two tissues, slunk down in her chair hoping to be hidden by the podium, and disguised her laughter as some kind of spiritual overtaking. Needless to say, Mother had long since shrunk out of sight.

The day ended well. The introduction was made as Cat and I looked on from a distance, delighted. No real relationship came of it but, not to worry, Rev. Ann would always be on the lookout for ways to make every life complete.

That same evening I wrote to a friend, another African Methodist Episcopal minister, about this exciting day. I still have that letter. I decided many years ago, before paperless filing, that I would save a copy of all my letters. As I try to recall events for my memoir these letters are an information treasure trove. Keep your letters for when you decide to record your personal history. Be selective about what e-mails you delete; ask yourself if they will be helpful at some time in the future when you are trying to prime your memory.